Earlier this month I was passing through Union Square on my way to see one of my beloved teachers Joan Suval from Ananda Ashram.   As I was walking there was the drumming sound of helicopters overhead, New York City Police Officers & NYPD vehicles everywhere.  Once I crossed to the other side of the park, I heard this collective sound coming from a large group of protestors gathered in the area in front of Barnes & Nobles Bookstore.  The group was protesting the recent decision not to indite a police officer in the death of Eric Garner.  I couldn’t hear their exact words of protest.  But something about the repetition of those words carried a certain calm and resolve.  The sound of their collective voices made me want to join them.  And yet as I continued to walk to meet my teacher, I felt there was maybe another teaching I should be walking towards.
The next day I was speaking with a student and friend after class.  She was sharing with me how she came across a group of protestors in another part of the city who sounded angry & enraged, on the verge of violence.  And that as much as she believed in what they were protesting, she didn’t want to lend her voice to that nature of protest. 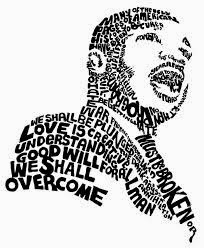 Daily as Yogis we allow ourselves to feel the influence of sound on our minds and bodies, simply even through the sound of our breath.  We often feel this influence on a cellular level, from the possibility of expansion vs contraction, a feeling of opening vs a closing off, a strengthening vs a weakening, a feeling of empathy to a feeling of aversion.  This range of experience in our practice that comes through range of sound (from hearing the sound of our breath to not hearing that sound), inevitably informs what sounds we want to lend our voices to throughout our day.  From gossip to praise, from harsh critique to constructive feedback, from sarcasm to honesty, from violent protest to peaceful protest.

Our voices are an articulation of the breath.  In allowing our breath to be heard, our voices also find a way to be heard with the same calm and resolve.